skip to main | skip to sidebar

Fat Possum
Posted by hazzy at 6:15 PM No comments:

Creativity and inspiration during hard times

I wonder why, to me, some of my most productive periods of time writing songs were during some of the most difficult times in my life. I think it's true for many artists that some of their best material is fueled by hard times. I haven't really written any good songs as far as I'm concerned in about 2 years. The last songs that I wrote that I consider worthy of ears were written during a difficult time when I was going through a divorce from a 7 year marriage. I think inspiration for me comes in waves. The question is, would I rather be void of difficult times and not have the fuel for inspired music, or have hard times and as a consolation, great music coming to me from the sky. Well, I don't think you can think of it that way. For now, being a satisfied person void of hard times is fine. Let's just say I'm not going to look for a serious relationship and purposely sabatoge it, just so I can have some fuel for good music. Hard times come to everyone whether you like it or not. It's part of life and whatever constructive way a person uses to cope with those times with their art, music or whatever, that's a good thing. Knowing that creating a song or piece of art may help to ease someone elses pain a little, helps.
Posted by hazzy at 6:55 PM 1 comment:

This blog contains links for guitar tabs from hundreds of bands, links to guitar videos, lessons, almost anything you can imagine that has anything to do with guitar
Posted by hazzy at 5:40 AM No comments:


Fela was one of the most outspoken african musicians of all time. It's amazing how few people have heard of him. His songs are very political, often exposing the corruption of the Nigerian government and in the process getting him into a lot of trouble. The tunes usually start with a bass line that repeats the same line, for sometimes up to 20 minutes while guitars, saxophones, percussion, keys and vocals build layers that lead the songs into dynamic crescendo's that leave fans spellbound. Check out this site and treat yourself to some of this hynotic music. For other sites just google Fela Kuti. Fela
Posted by hazzy at 5:19 AM No comments:


Check out this band from the Southern sahara region called "Tinariwen." Their music is a combination of afro-pop and blues from the Mali region. Many of the songs are based on call and response where the lead singer sings out a phrase and then is echoed by a chorus of voices repeating the same line. Absolutely hypnotic, powerful music!! I wish I knew what they were saying, that would make it even more interesting for me. I'm not sure what language they speak, I think it's Algerian, but not 100% sure. Check it out!
Posted by hazzy at 10:53 PM No comments:

This is a cutting edge site as far as seeing what's out their as far as new digital equipment goes. The site does a good job of explaining the capabilities and limitations of the technolagy available.
Posted by hazzy at 10:44 PM No comments:

This is offered to kids n Central MN through the Central Mn Music School!
It's an absolute blast! This is the 2nd year for School of Rock!
It'.s for kids between the ages of 11-18.
Check out some of the video's from this years performance at Apollo High School.

The Crappy Kitchen"/>
which is a cooking show that runs on cable access in the central MN area.

I'ts easy to get lost in "jimmyography" There are a lot of places to go to and check out. Jimmy also has many videos on you tube to check out.
Check out the "Spanish Rice" episode. Awesome dish!!

I would say a couple of the bands that I like but consider fairly souless are Steely Dan and Yes. Both bands have incredible musicians and create arrangements that are mind blowing, but never seem to scream out to me from the soul. A funny quote from Johnny Rotten from the Sex Pistols that I heard one time was "they (bands like Yes, and Emerson Lake and Palmer) act like they are so sophisticated when really all they are are a bunch of college graduates twanging and bashing slowly and miserably!" It doesn't totally make sense but it rolls off the tongue pretty well.
As far as white bands/musicians that aren't really considered to be "blues" or "soul" music but still have soul and great dynamic intensity in my opinion are the Doors and Neil Young. There are many other examples that I could give of bands on both sides of the soul and souless spectrum, but this is just my mind wandering at 4:30 in the morning, and I don't feel like elaborating. I'll let these cuts do my elaborating for me. Good but souless..."Peg" by Steely Dan. Great and soulful..."When the Music's Over" by the Doors, especially live. I think maybe I'll talk about Bands that are great live but not in the studio and vise versa sometime, but not now. Gotta go.
Posted by hazzy at 4:28 AM 1 comment:

What makes a great piece of music.

I often find my mind wandering thinking about what exactly makes me feel that a particular song or piece of music is great. There is both the lyrical and musical aspect of it. As a songwriter, it's both inspiring and frustrating to hear an amazing song. For example, the song; "A Day in the Life" by the Beatles. In my opinion, this is the Beatles masterpiece. I find myself thinking, "How could anyone come up with a song that f'ing amazing?" The frustrating part is I'm also thinking to myself, there is no way in your wildest dreams that you will ever write a song that good. Sad but true.
I think the best songs are the ones that seemingly fall out of the sky into the minds of musicians. The key is having the ability to turn that moment of "insperation" into a great song. The polar opposite of this are songs that are both lyrically and musically predictable. Songs that follow an already exhisting template. Music fabricated by well to do uninspired musicians who's sole purpose is to make a bunch of cash selling their image more than making original music. It's like a Rubics Cube. They can change the colors, but it will always be a Cube.
Posted by hazzy at 3:48 AM No comments:

I couldn't really grasp what this person was strving for. It seemed like I was in a booth at a restaurant having dinner wth people that really couldn't relate to.
Posted by hazzy at 3:15 AM No comments:

city of sound blog
Didn't checked it out yet
Posted by hazzy at 7:04 PM No comments:

Finally learning how to do this. Nothing much more to say. Brain dead today. 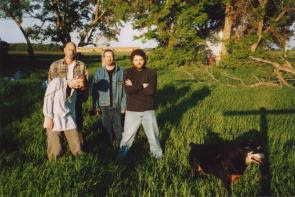